There are some high-quality food products in Tuscany that distinguish themselves from their competitors by having earned an EU designation of quality label: PDO Protected Designation of Origin (DOP in Italian) and PGI Protected Geographical Indication (IGP in Italian). Both certificates guarantee the customer that they are purchasing food with certain origins and certain characteristics. They also represent a guarantee for the producers themselves, safeguarding them against potential imitators:

Here you can download the infographic with all the products.

At the moment there are 31 food products in Tuscany marked with the European labels IGP and DOP. Find out here the full list:

Monte Amiata chestnut – Castagna del Monte Amiata IGP (Monte Amiata): A sweet, dry, delicate chestnut from the volcanic soils of the Amiata. Either boiled or roasted, they go perfectly with sweet muscat wines, and can also be dried and ground for flour to make castagnaccio and chestnut polenta.

Garfagnana chestnut flour – Farina di neccio della Garfagnana DOP (Garfagnana - Lucca): The cultivation of chestnuts trees for their nuts dates back to around 1000 CE. Indeed, the chestnut tree is known locally as the ‘bread tree’, as the chestnuts yield flour, which goes into all sorts of sweet and savoury morsels.

Mugello chestnut - Marrone del Mugello IGP (Mugello - Firenze): This denomination is reserved for sweet chestnuts from the Mugello, either dried or ground into flour. The IGP Mugello sweet chestnut is markedly sweet, easy to peel, not excessively floury and perfect for a delicious marron glacé. It contains slight hints of vanilla and a redolence of hazelnuts or fresh bread.

Siena Panforte – Panforte di Siena IGP: panforte is a traditional Christmas fruitcake, fairly flat and compact. It is typically made with honey, walnuts, almonds, spices and candied fruit, and is either covered with aromatic spices or icing sugar, as is the case with the "Margherita" version, named after Queen Margherita.

Tuscan cantucci - Cantucci Toscani IGP: cantucci, or cantuccini, are oblong-shaped biscuits, very popular in Tuscany. They are made with with flour, eggs, butter, sugar, honey and natural sweet almonds, and are traditionally served as dessert with a glass of Vinsanto.

Pecorino Romano cheese DOP (Grosseto area): This is a hard cheese, made out of sheep milk exclusively from farms in the areas of production (Lazio, Sardinia and the province of Grosseto in Tuscany).

Pecorino Toscano cheese DOP (throughout the region): This is the flagship of the Tuscan cheesemaking tradition. Its unique, delicate flavour tells an ancient story, one that started in the age of the Etruscans and is still being told today. As well as Tuscany, it is also produced in a handful of bordering municipalities, 11 in Umbria and 2 in Lazio.

Finocchiona IGP (throughout the region): This soft, scented salami is made with top quality meat cuts and seasoned with wild fennel seeds or fennel flowers and pepper. Its origins date back to the Middle Ages, when wild fennel seeds were used as a cheap alternative to pepper, which was more expensive. It is said that Machiavelli was particularly fond of Finocchiona.

Mortadella Bologna IGP (throughout the region): This is the classic Italian mortadella pork sausage, pink in colour, strong in smell, with a touch of spiciness. It is produced in Emilia Romagna, Piemonte, Veneto, Tuscany, Trento, Marche, Lazio and Lombardy.

Mortadella di Prato IGP: This mortadella is produced in the area around Prato. It is noted for its spiciness and the addition of an ancient alcohol: alchermes, which are normally used only in sweets, such as the so-called "Prato peaches". Prato Mortadella goes very well with aperitifs or in traditonal recipes like sedano alla pratese (Prato celery).

Prosciutto Toscano DOP (throughout the region): Prosciutto Toscano is made only with fresh meat of the highest quality from six regions of central and northern Italy, including Tuscany. After a long seasoning, Tuscan prosciutto emerges with a delicate flavour, an optimum sapidity and rich aromas.

Colonnata lard – Lardo di Colonnata IGP (Colonnata, Massa Carrara): This highly prized and fragrant product is made from pork lard, which is cured in marble basins in Carrara, before the layers of lard are alternated with salt, pepper, sage and rosemary. What originated as a meal for marble quarrymen has become a delicacy known throughout the globe.

Small Italian salamis alla cacciatora (hunter-style) - Salamini italiani alla cacciatora DOP (throughout the region): Different types of small salamis are produced all over Tuscany and throughout central and northern Italy. They are known as cacciatori or cacciatorini and are usually dry, compact and ruby red in colour.

Toscano IGP Extra virgin olive oil (throughout the region): Tuscan extra virgin olive oil is produced wholly and solely within the region of Tuscany Region, from the cultivation of the olives to the extraction of the oil and the packaging. But in order to win the IGP certificate, it has to have the particular physical, chemical and sensory qualities that lie behind its unmistakable flavour and quality.

Chianti Classico DOP Extra virgin olive oil (Chianti area):The production area of this oil is the same as that delimited for Chianti Classico wine. Its colour can vary from a deep green to a greenish-gold, while fruity aromas belie have a slightly bitter, decisively pungent flavour.

Terre di Siena DOP Extra virgin olive oil (Siena area): Different kinds of olives can be found in this oil: Frantoio, Correggiolo, Moraiolo e Leccino, which grow in the hills of the province of Siena, save the Chianti Classico wine production area. dedicated to oil production. Colour ranges from green to yellow, while the taste is lightly bitter and pungent.

Lucca DOP Extra virgin olive oil (Lucca area): This olive oil is produced in a well-defined geographical area of the province of Lucca, covering the municipalities of the Lucchesia, Versilia and the Garfagnana. It has a fruity, essentially sweet taste, but with a few bitter, piquant notes.

Seggiano DOP Extra virgin olive oil (Monte Amiata): This oil is obtained exclusively from the olive groves on the slopes of Monte Amiata which have at least 85% of the Olivastra Seggianese cultivar. Its colour varies from green to gold, with notes of herbs and white fruits. A clean flavour confirms the aromas, while keeping a touch of bitterness and pungency in play.

Garfagnana spelt – Farro della Garfagnana IGP (Garfagnana area): The perfect, healthy option for all your summer salads and winter soups! Farro, or spelt, is a truly ancient grain. It was a favourite footstuff of the Romans, who used it to feed their legions.

Sorana bean IGP Sorana beans – Fagiolo di Sorana IGP (Sorana - Pistoia area): Whether the pearly, small, thin-skinned "Piatellino" or the bigger, red "Antico Rosso", the Sorana bean is tasty and easy to digest. It is grown, using organic methods, in the hills of Pescia (Pistoia), where local farmers have passed down seeds and cultivation techniques from generation to generation.

Lunigiana Honey – Miele della Lunigiana DOP (Lunigiana area): The honey of the Lunigiana was the first in Italy to obtain DOP status from the European Union; it is also certified organic. The DOP classification for Lunigiana honey is reserved for two types: acacia honey and chestnut honey.

Tuscan bread - Pane Toscano DOP (throughout the region): The "type 0" Tuscan common wheat from which Tuscan bread is made maintains its wheat germ, which has now disappeared from common flours, during maceration. It rises naturally, without relying on additives. What makes the bread truly unique, though, is the complete absence of salt.

Cinta Senese (breed of pig from Siena) DOP (throughout the region): The fresh meat of the Cinta Senese comes from a breed of pig that is raised in Tuscany and feeds mostly on pasture; the breed is also characterized by a dark coat with a belt (cinta) of light hair that rings the middle of the body. The meat is exceptionally tasty, and also forms a staple of traditional Tuscan charcuterie.

Central Italian Lamb – Agnello del Centro Italia IGP (throughout the region): This is the fresh meat of lambs less than twelve months old, from any of the ovine species common to central Italy. The production area includes Emilia Romagna, Tuscany, Marche, Umbria, Lazio and Abruzzo. After weaning, the lambs graze on pasture, and some farmers move them according to the seasons, having them winter on coastal plains and summer on Apennine meadows. 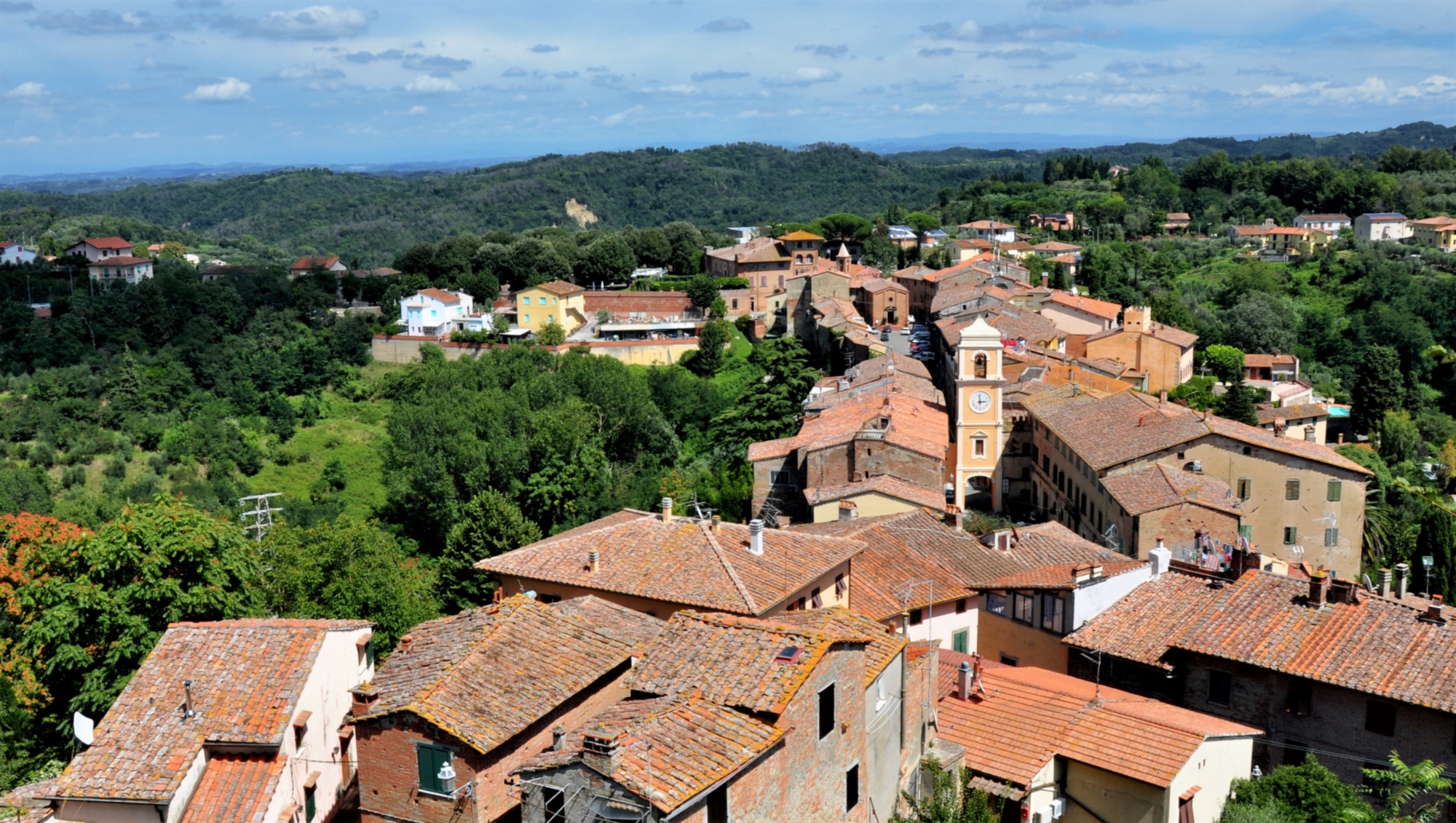 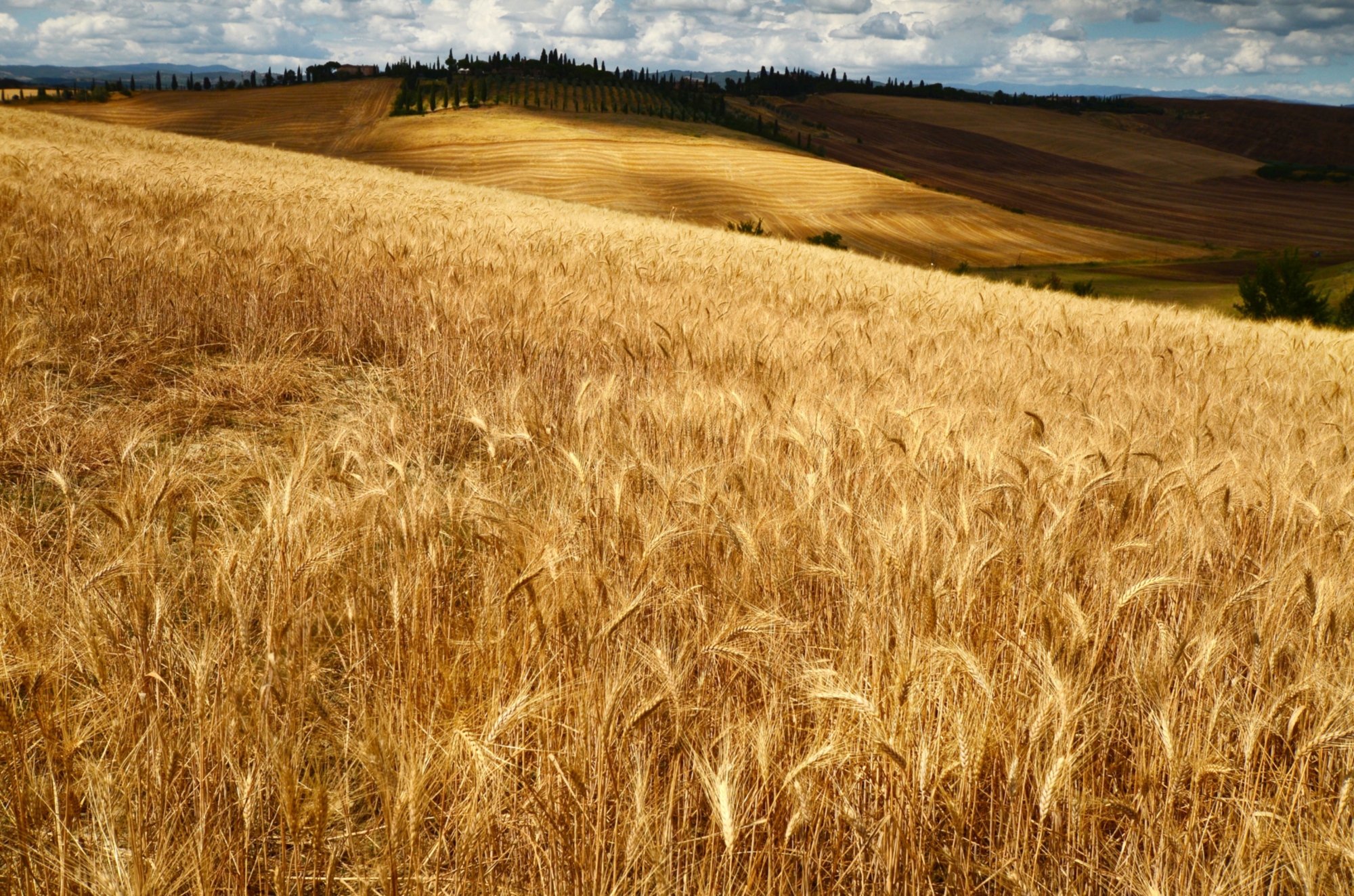 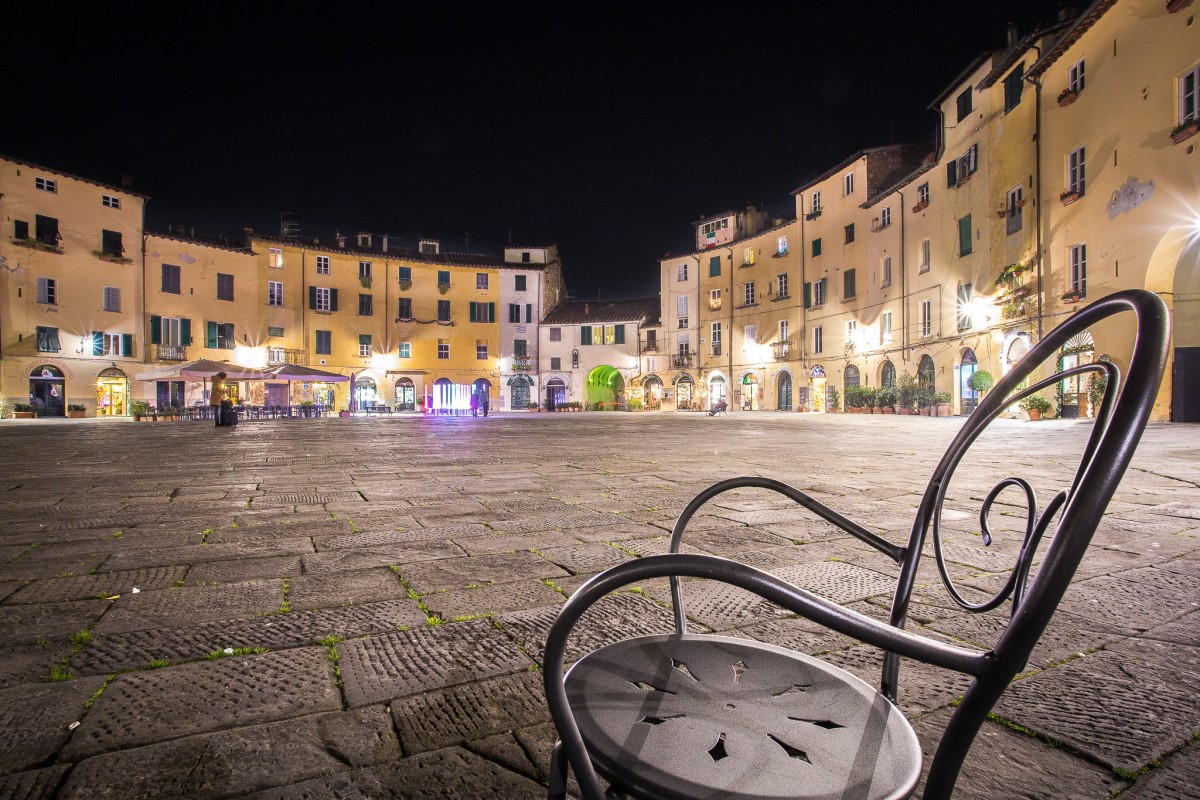 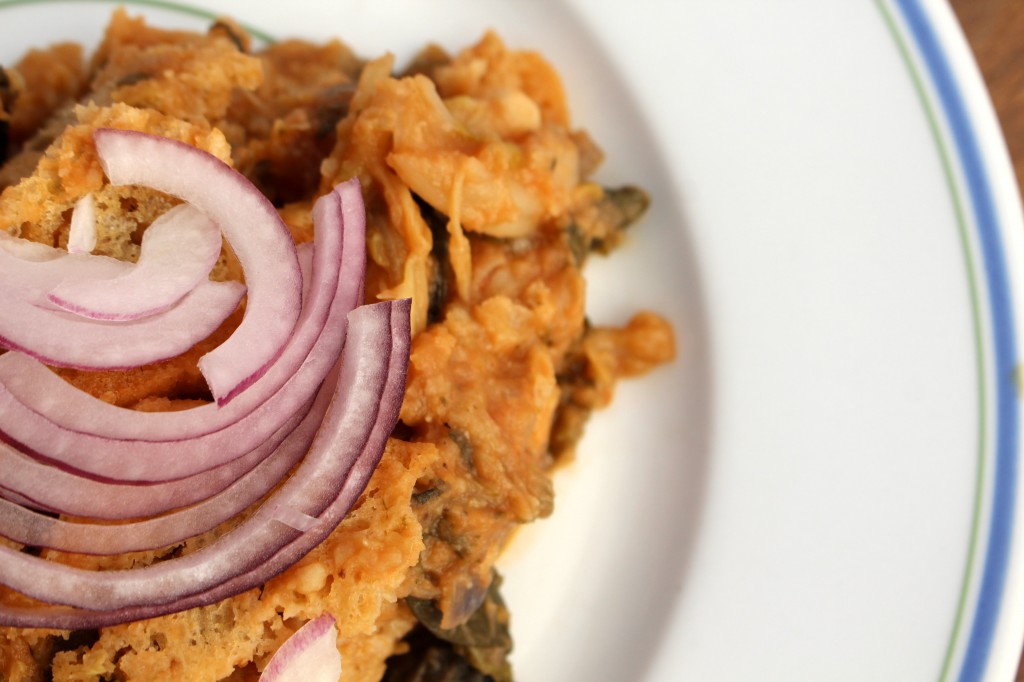