Getting around
wb_sunnyWeather
dialpadUseful numbers
get_appDownload Area
mail_outlineContact us
Sign up to our newsletter
A treasure trove of secrets, events, curiosities and news, straight to your inbox
Follow us!
Tuscany official tourism website ©2023
Italiano English Deutsch Español Français
Photo © Giovanni
Places of worship

A centuries-old church in the Carmignano countryside, founded by Matilda of Canossa

There are records of the Parish Church of San Leonardo in Artimino from as far back as 998. Initially dedicated to the Virgin and Saint John, it was enlarged at the behest of the Countess of Tuscany Matilda of Canossa in the early 12th century. During the 16th century it was finally dedicated to Saint Leonardo.

The building was owned for many years by the Frescobaldi family, and is a striking example of 11th-century Lombard Romanesque architecture in the Prato area. Its original structures were further enhanced by a restoration in 1971.

In the masonry below the 16th-century loggia and in the bell tower, there are fragments of figured Etruscan urns which seem to testify to how far back the origins of worship reach here.

The contrast in style with the Gothic vaults of the interior, the three naves and the imposing exterior appearance is quite unusual. The church houses a number of works of merit, such as the statue of St. Leonard in polychrome wood (likely datable to the 14th century), the terracotta "Visitation" from the late Robbiana school, and a wooden statue from the Tuscan school of the 15th century. 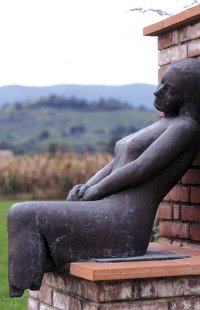 Quinto Martini Park Museum
The Museum of Grapes and Wine in Carmignano
Villa medicea La Ferdinanda
Abbey of San Giusto al Pinone
Archeological Park in Carmignano
Archaeological Museum in Artimino
Quinto Martini's home studio
Barco Reale Mediceo, Montalbano area
Visitation by Pontormo
Necropolis of Prato Rosello
Pietramarina Archeological Area and Nature Park
Carmignano
Landscape, history and great food on the gentle hills of Montalbano
The Carmignano territory stretches between the gentle hills of Montalbano and could even be defined as "a little Tuscany" given that it contains everything that has made this region famous and loved all over the world: great art, landscape, archeology, wine and wonderful food. ...
Moreeast
explore
Explore
Discover Deals, Events and Accommodation nearby
Deals Events
explore
keyboard_arrow_down
Italiano English Español Deutsch Français