Getting around
wb_sunnyWeather
dialpadUseful numbers
get_appDownload Area
mail_outlineContact us
Sign up to our newsletter
A treasure trove of secrets, events, curiosities and news, straight to your inbox
Follow us!
Tuscany official tourism website ©2023
Italiano English Deutsch Español Français
Photo © Massimilianogalardi

The town of Cantagallo, located in the valley of the Rio Ceppeta, at the source of the river Bisenzio, nowadays is surrounded by the green mountains of the Tuscan-Emilian Apennines. Its most notable characteristic is that it is an area surrounded by a landscape of forests, not without enchanting stretches, at intervals dominated by beech and chestnut forests, in addition to the classic conifers and mixed forest stretches. Thanks to the continuity of the forests, rarely interrupted by grassy clearings, a remnant of ancient pastures or cultivation, this is now one of the areas in the whole of Italy most frequented by deer, with a population known nationwide both for the complexity of their structure and the majesty of the specimens.

Cantagallo
Stories in the Apennines
From the Romans to the Byzantines, everyone has passed through them, even Dante
Read the story

What to see in Cantagallo

Not much information has come down to the present day about the history of this territory in the centuries prior to the 14th, in any case, as early as 1234 Cantagallo appeared to have an administrative apparatus destined to become increasingly important over the centuries.

The medieval village, totally destroyed during World War II, is an ideal base for excursions to the mountains of this territory, from where there are wide panoramic views. The village is also home to the Centro Visite della Riserva Acquerino Cantagallo (Visitor Center of the Acquerino Cantagallo Reserve), which can be contacted for information and to organize excursions.

The seat of the municipality is in the hamlet of Luicciana, in the Palace known as La Torricella, outside and inside of which one can admire works of contemporary art, part of the Museo all’Aperto (Open-Air Museum) that since 1984 has transformed the streets and small squares of this small village into a true contemporary art complex, with works by painters, sculptors, graphic designers and ceramists.

In the village of Usella the Museo Materia – Museo dell’Arte Tintoria, delle Energie Rinnovabili e dell’Ambiente (Museum of the Art of Dyeing, Renewable Energy and the Environment) has been opened, set up for the purpose of instilling environmental awareness and to communicate in an innovative way the art, history and technology that has developed over the years in the textile world of the Bisenzio Valley and the Area around Prato in general. Water is the protagonist of this museum, housed in a structure that has been used since the Middle Ages for productive purposes, alternately as a mill, gualchiera (a pre-industrial machinery), ironworks, branch mill, dyehouse, hydroelectric plant.

Usella is also home to one of the oldest churches in the valley, already documented in the year 997: the church of San Lorenzo.

Between Usella and Carmignanello, not easily reached, is the fascinating (and bumpy) 12th-century Rocca di Cerbaia (Fortress of Cerbaia), over which hovers the legend of the failure to welcome Dante Alighieri who was running away from Florence in 1285. Also notable, again in Cerbaia, is the ancient bridge, the oldest crossing still standing over the river Bisenzio.

In the territory of Cantagallo is located the Riserva Naturale Acquerino Cantagallo (Acquerino Cantagallo Nature Reserve), which includes large woods consisting mainly of beech and chestnut forests, alternating with meadows or pastures, where it is easy to spot herds of deer. The Reserve is home to a number of monumental trees: the Vespaio Chestnut Tree, the Turkey Tree of Poggio Tondatoio, the Holly of Luogomano, and the Beech of Luogomano, a huge tree about 300 years old, formed by two stems grown together, one of which collapsed in 2013. 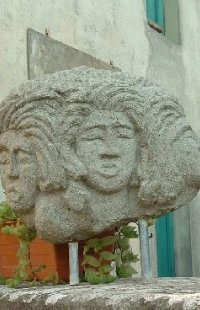 Trip to the Prato area

2 Legs  • 44.5 km
The Via delle Rocche
View allarrow_forward
explore
Explore
Discover Deals, Events and Accommodation nearby
Deals Events
explore
keyboard_arrow_down
Area
&
Area
Prato area
Excursions, historic villas, interesting museums and much more make for a unique holiday
The Prato area lies between the ridges of the Calvana mountains and the forests on the nearby Apennines. ...
Moreeast
Other towns and cities in Prato area