Church of Sant'Agostino in Arezzo

A church with medieval origins that combines Romanesque, Baroque and Rococo style

The Church of Sant'Agostino, built starting from 1257, overlooks the square with the same name in the historic town center of Arezzo.

Because of its small size, already in 1330 began a major expansion to create a structure with three naves. However, there were several interruptions and resumptions until, in 1491, the project was relaunched, allowing for the completion of the building.

We are between 1761 and 1766 when new works disrupt the church, halving its size: it was in this historical moment that the cycles of frescoes and paintings on wood that had enriched the building between the 14th and early 16th century disappeared.

The interior was then modified reflecting the artistic canons of the time: those of the Baroque and Rococo. An example is the central apse, decorated with white and green stuccoes by Carlo Sproni and Giuliano and Francesco Rusca from Milan. The Cantoria (1765), also by Francesco Rusca and visible on the counter-facade, is another work of great impact.

The wooden choir carved by Ludovico Paci in 1771 also dates back to the 18th century.

Inside the church, there are 17th century paintings by Bernardino Santini, one of the most important 17th century painters from Arezzo. His is also the wooden Crucifix on canvas with St. John the Evangelist and St. Francis (1642).

Among the oldest works, there is the fragmentary altarpiece of the Circumcision of Jesus, made by six hands by Niccolò Soggi, Domenico Pecori and the Spanish Fernando De Coca. A curiosity about this masterpiece: created in 1506 for the church of the Holy Trinity (or Misericordia), the work was transferred to Sant'Agostino in the 18th century. In 1922 a thief stole it, dismembering it into five parts. Once discovered and recovered, the altarpiece remained in the Museo Statale d'Arte Medievale e Moderna of Arezzo, until, decades later, it was restored and relocated into the church, where today it can be admired despite being conspicuously mutilated.

Official building of the District of Porta Sant'Andrea, the Church of Sant'Agostino is an elegant example of Baroque art in Arezzo, which still retains the simple facade in stone conception as evidence of its past. 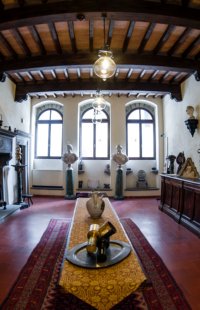 Ivan Bruschi House Museum
“Gaio Cilnio Mecenate” National Archeological Museum
Sargiano Wood
Arezzo
A historic treasure chest, home to well-known names such as Vasari and Petrarca
The city of Arezzo, situated in the South-West of Tuscany, rises up a hill which takes in 4 valleys: Valtiberina, Casentino, Valdarno and Valdichiana. The city has deeply historic origins, and is – although this is a little-known fact – even older than Alexandria in Egypt! ...
Moreeast
explore
Explore
Discover Deals, Events and Accommodation nearby
Deals Events
explore
keyboard_arrow_down
Italiano English Español Deutsch Français