An exhibition exploring the territory

The Archeological Museum in Montelupo Fiorentino, housed in the former complex of San Quirico e Santa Lucia, conserves around 3,000 archeological artefacts coming from a variety of places, the result of over 30 years of research carried out in the heart of northern Tuscany, between the mid-Valdarno Fiorentino, the lower Val di Pesa and Montalbano.

In addition to the extraordinary wealth of prehistoric documentation, visitors can admire ceramics, metals and works made from bone and glass coming from the large hut settlement of Bibbiani, an archeological area dating to the Bronze Age.

There are particularly important bronzes and ceramics from the Etruscan settlement of Montereggi (6th to 1st century BCE), including an Attica kylix attributed to the Kodros painter, active in Athens between 440 and 430 BCE.

There are also several important materials from the Roman period coming mostly from the two large country villas in Montelupo (Vergigno) and the Oratory in Limite sull’Arno.

The museum also conserves significant documentation from the Middle Ages, like evocative early-medieval objects (an olifant from Montereggi) and a gilded bronze bowl with a portrait of Charlemagne, found along the Arno. 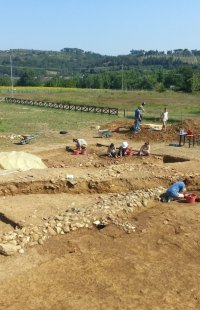 Roman Villa del Virginio in Montelupo Fiorentino
Montelupo Fiorentino
A journey into craftsmanship, amidst tradition and innovation
Montelupo, just outside Florence on the banks of the Arno, has been renowned for its ceramic production since the Middle Ages, bringing the town much fame. This activity has long driven the prosperity of Montelupo, the perfect place for the industry thanks to the water, clay and wood for feeding the kilns. ...
Moreeast
explore
Explore
Discover Deals, Events and Accommodation nearby
Deals Events
explore
keyboard_arrow_down
Italiano English Español Deutsch Français