The Pieve di San Giovanni Battista stands in the center of Pievescola, a small hamlet of Casole d'Elsa, surrounded by the nature that thrives at the foot of the Montagnola Senese.

The origins of the building date back to the early Middle Ages. The first evidence of its existence dates back to 1032, when Cunerado di Rodolfo - whose identity remains unknown - took an oath to the diocese of Volterra, which, at the time, extended to include the current Pievescola. Its belonging to the bishopric of Volterra is also confirmed by two papal acts of Alexander III, dated at the end of the 11th century.

Some interventions carried out in the 12th century gave the church the aspect that can still be admired today. The facade is simple and in Romanesque style, decorated by a bichromatic lunette placed above the main door, to protect a small bas-relief. The marble three-mullioned window that opens in the middle of the wall has been built recalling the Pisan style: the shape of the capitals has ascribed this work to Master Bonamico, who, in the 12th century, was at work also in the Pieve di Mensano. The facade is completed by a bell gable placed in an unusual position, apparently asymmetrical compared to the linearity of the facade.

The interior walls, once plastered, have been returned to their original state. The church also shows the simplicity of the facade inside, with austere stone walls and two rows of cruciform polylobate columns. The whole structure of the pieve is basilical, divided into three naves with five bays each; each nave ends in an apse visible from the outside, for an overall triapsidal structure similar to the one characterizing the pieve of Abbadia a Isola.

The soft light that enters from the three-mullioned window and from two small side slits envelops the Pieve di San Giovanni Battista in a muffled, almost mystical atmosphere. In the silence of the church, you can admire a marble tabernacle dating back to the mid-14th century and a holy water stoup of Renaissance origin, as well as a modern crucifix, made in the last century. 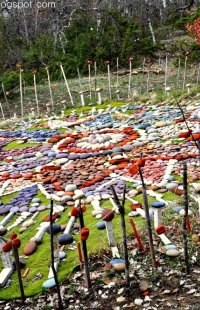 Dream Woods
Civic Museum of Archeology and the Collegiate Church in Casole d’Elsa
Village of Mensano and the parish church of San Giovanni Battista
Etruscan Tumulus of Mucellena in Casole d'Elsa
Casole d'Elsa
A romantic village on the characteristic hills of the Valdelsa
Casole d’Elsa, once a historic Etruscan settlement, is a village situated along the spine of a hill with a stunning panoramic view of the Sienese countryside. In the 11th and 12th centuries, the town was a fiefdom under the control of the Volterra Bishops, passing to Sienese control in 1260. ...
Moreeast
explore
Explore
Discover Deals and Events nearby
Deals Events
explore
keyboard_arrow_down
Italiano English Español Deutsch Français