Inside Siena's Duomo is a room, off to one side, that hosts one of the most colourful and elaborately decorative fresco cycles of the turn of the sixteenth century.

The Piccolomini Library was painted by the Perugian painter Pintoricchio (Bernardino di Betto) in 1502 for his patron, the cardinal of Siena, who wished to honour his uncle Pope Pius II who died in 1464. (The unfortunate cardinal Francesco eventually got promoted to the Papacy and died 10 days later!) Pope Enea Silvio Piccolomini was one of the greatest humanist scholars and the library in Siena was built to house his precious collection of illuminated manuscripts. The frescoes in the large lunettes that line the walls tell the story of the Pope's life, while the surrounding decorative elements and ceiling are in the "grotesque" style that imitates ancient Roman examples that were very popular with artists and humanists at the time.

When you visit the Piccolomini Library, don't try to understand exactly what's going on in the frescoes, because it's part of a secular story that you're unlikely to know. What you do need to know is that it depicts a mythologized and glorified version of the life of the Pope, so look for the same guy in each scene. It starts at the far end on the right wall with a young boy, and you see this character growing older and always further up in the ecclesiastical ranks as you continue your way through the paintings. I heard a talk by an acquaintance about the role of gesture in this fresco cycle, from which I learned that there is often a figure helping us by pointing to the action; the gesture or hand motions of the protagonist are also important in communicating the moment of the story, such as acceptance of an honour or the giving of orders. To refresh my memory of this place that I visited and photographed last year, I took out my old copy of Hartt's Renaissance Art textbook from which I quote the following great description of the Library:

The frescoes fill ten lofty compartments that reach from the reading desks to the arches of the vault. The compartments are separated by painted pilasters and are framed by illusionistic arches whose jambs and soffits are decorated with marble incrustation (painted, of course); the pilasters have a continuous decoration in grotteschi. Each compartment allows us to look out, as if through the arch of a gigantic loggia, into a scene from Aeneas Silvius' life, painted in clear and brilliant colors. The pageantlike incidents of this mythologized biography display a gorgeous panoply of costumes against fanciful architectural or landscape backgrounds, except when a recognizable setting was required by the narrative (p. 371, 4th edition, 1994)

Pintoricchio excelled in the creation of decorative patterns, costumes, and bright colours. His frescoes contain a curious range from naturalistic features - like the storm scene over a fantastical version of Genova in the "Departure of Aeneas Silvius for Basel" or the detailed plant samples at the bottoms of the paintings - to the rather bland expressions of the characters themselves (in this he takes after his fellow Perugian, Perugino, whose faces all look the same). Pintoricchio transplants his style, developed in the provinces and matured in Rome, to turn-of-the-century Siena, where he found himself somewhat influenced by the local artist Domenico di Bartolo but continued to paint in a way that was foreign to Siena. As far as I can see, despite the masterly treatment on these frescoes, Pintoricchio's style had no influence at all on local painters. Perhaps my readers will know better and add their opinions on the matter in the comments. 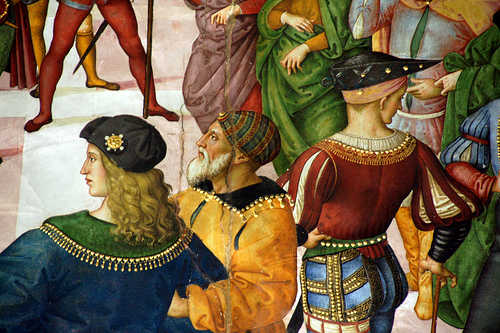 Two other things not to miss while you're entranced by the frescoes. First, don't forget to look at the books! Second, on your way out, look down - near the entrance to this space, the artist also designed one scene of the famous floor decorations; the "story of Fortune" illustrates the virtuous road to knowledge and can be considered part of the same iconographic programme. 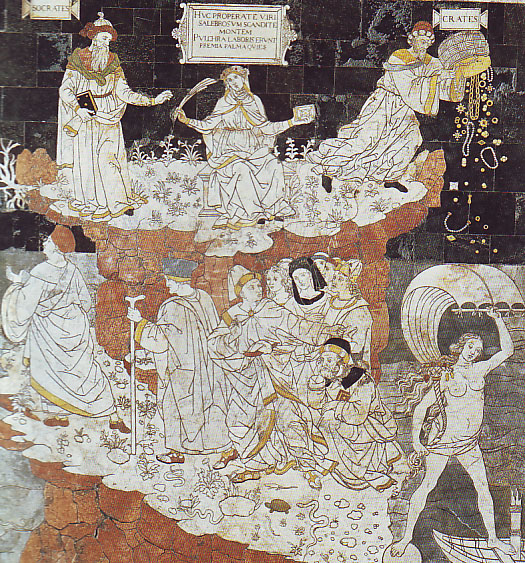 You might also be interested in
Motorcycle ride in Siena and Grosseto hills
Quarries and thermal waters by bike from Rapolano Terme
Kid-friendly bike route in the Siena area
The most beautiful bridges of Tuscany
8 places in Tuscany for archaeology lovers
Siena, what to see and do
Be amazed by the Crete Senesi and the Accona Desert
The sky roof: visiting the San Galgano Abbey

&
Art and Culture
Itinerary
A road trip across the Casentino area
Hop in your car and explore hamlets, castles and churches in the Casentino